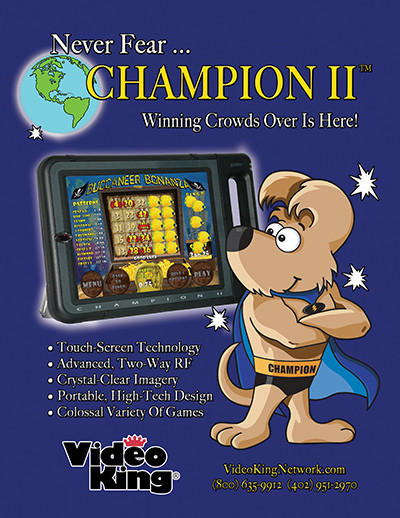 Video King, known worldwide for its superior electronic handsets, has once again raised the bar in unbeatable product performance. In the gaming arena, this durable, yet light-weight gaming device, has no problem muscling out the competition!

The Champion II™ delivers a one-two punch with vivid colors that pop off its crystal-clear screen. Winning crowds over, this sleek design, with its two-way communications, lets players interact by simply touching the visuals on the screen!

•Pump Up Player Spends! Patrons can buy cards at any time. Mid-session purchases can be done on the tablet. No hall staff required!

•Eliminate Long Cashier Lines! Players can take any tablet, enter their account number and gain access to their purchases!

•Championed By Callers! No more manual entry of verified cards. B-I-N-G-O claims are sent directly to the PowerPlay™ console. The caller simply verifies the B-I-N-G-O, and the system transmits the results back to every tablet in the hall!

•Pick Your Preference! Champion II offers a variety of card and flashboard layouts: One- and two-card B-I-N-G-O, for those who prefer bigger, bolder images, to four-card, six-card and incredibly sharp, twelve-card views – which all include a flashboard display!

•Automated Daubing! Champion II, like its predecessors Lil’ Champ™ and SuperChamp™, has a variety of daubing modes, triggered by its radio frequency features. Balls are sent directly from the PowerPlay™ console to the tablet, where they are automatically daubed giving players more time to daub paper cards!

This product hasn't received any reviews yet. Be the first to review this product!