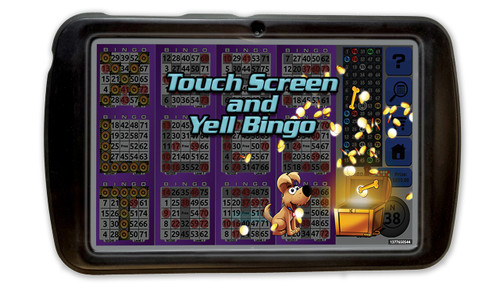 Want to get a real “charge ...” We certainly have ... in more ways than one. Video King is excited to introduce one of the most technologically advanced types of charging systems in the industry today.

Known as the CHARGE-e,™ this patent-pending device will be used to power the CHAMP-e,™ our newest Android gaming tablet, using wireless technology – with possible applications beyond the gaming industry.

This new charging system is virtually foolproof, theft-proof, as well as incredibly easy to service.

Among its many exciting features, the charge rack has a sliding door that can be keylocked to ensure tablets can’t be removed, further enhancing security measures.

Capable of holding 10 tablets per rack, its new power supply and mechanical workings are all serviceable from the front, greatly impacting maintenance ease.

And why would this be generating such a buzz ... “If you have 250 tablets in your hall, with 20 charge racks, and the middle rack goes out, that could be a big maintenance headache," according to our R&D team of the new design.

Using less power than before, the CHARGE-e also has a 2:1 charge ratio, meaning for every one hour of charge, you’ll get two hours of run time.

“Almost no one has 8- to 10-hour sessions. Most halls only have 2- to 4-hour sessions, then they would charge the device after that,” they said of its optimal charging time.

But how the system works, one might say, is where we get our biggest charge ... even igniting, others might say, pardon the pun, some “mega-watt” delight.

“You simply place the tablets horizontally on the shelves, like you would a pan in the oven. Once on the shelf, there is no possibility for misalignment, there are no connectors. You can put it in straight or crooked, as long as the screen side is up,” they explained.

That’s because CHARGE-e with its seamless design, uses conductive technology or making contact to create the charge.

“Each shelf has two connector plates about an inch apart. The backs of the tablets have pins to form a contact base.

“Once contact is made between them, an indicator light shows the charger is connected and charging,” they explained.

Procuring the right tablet for our customer base, along with the new charge rack, also factored heavily for our Research & Development team, headquartered in Winnipeg.

“Video King extensively tests all our tablets and handsets to provide the highest quality device possible,” they said, as evidenced in our products’ long-standing popularity and durability.

Touted as a whole new dimension in gaming, the CHAMP-e is also capable of playing both cash and our highly popular, credit-based games, featuring dynamic themes, now with free cards and bonus rounds.

Now in its final design stage, the 10-inch device will be enclosed in a rubberized casing, with adjustable stand, much like our previous tablets, for added protection against drops and breakage.

And, we’d be remiss not to mention its rather unique fun factor, indicative of our entire Champ line of gaming devices.

In addition to more enhanced, high-resolution graphics, this portable, touch-screen tablet will also include a series of animations, featuring our canine mascot, “Champ,” in a variety of new poses.

So don’t be surprised when this rascally critter pounces his paws up against the screen to greet you, pops up randomly during games, or playfully wags his tail each time you “Touch Screen and Yell Bingo!”

As you can see, when it comes to electronic gaming, Video King continuously strives to lead the charge, bringing you the most satisfaction and maximum level of entertainment.

This product hasn't received any reviews yet. Be the first to review this product!